The final form is a complicated model, but one that allows for the construction of algorithms and tables suited to a wide variety of diving.

A typical dive computer has an 8—12 tissue model, with half times varying from 5 minutes to minutes. Tissues may be assumed to be in series, where dissolved gas must diffuse through one tissue to reach the next, which has different solubility properties, in parallel, where diffusion into and out of each tissue is considered to be independent of the others, and as combinations of series and parallel tissues, which becomes computationally complex.

Ingassing is generally modeled as following a simple inverse exponential equation where saturation is assumed after approximately four For optimised decompression the driving force for tissue desaturation should be kept at a maximum, provided that this does not cause symptomatic tissue injury due to bubble formation and growth symptomatic decompression sickness , or produce a condition where diffusion is retarded for any reason.

There are two fundamentally different ways this has been approached. The first is based on an assumption that there is a level of supersaturation which does not produce symptomatic bubble formation and is based on empirical observations of the maximum decompression rate which does not result in an unacceptable rate of symptoms.

This approach seeks to maximise the concentration gradient providing there are no symptoms, and commonly uses a slightly modified exponential half-time model. The second assumes that bubbles will form at any level of supersaturation where the total gas tension in the tissue is greater than the ambient pressure and that gas in bubbles is eliminated more slowly than dissolved gas.

This approach uses a variety of models. Haldane originally used a critical pressure ratio of 2 to 1 for decompression on the principle that the saturation of the body should at no time be allowed to exceed about double the air pressure. His experimental work on goats and observations of human divers appeared to support this assumption.

However, in time, this was found to be inconsistent with incidence of decompression sickness and changes were made to the initial assumptions.

This was later changed to a 1. Further research by people such as Robert Workman suggested that the criterion was not the ratio of pressures, but the actual pressure differentials. Applied to Haldane's work, this would suggest that the limit is not determined by the 1. At a given ambient pressure, the M-value is the maximum value of absolute inert gas pressure that a tissue compartment can take without presenting symptoms of decompression sickness.

M-values are limits for the tolerated gradient between inert gas pressure and ambient pressure in each compartment. Alternative terminology for M-values include "supersaturation limits", "limits for tolerated overpressure", and "critical tensions".

In effect the user is selecting a lower maximum supersaturation than the designer considered appropriate. Use of gradient factors will increase decompression time, particularly in the depth zone where the M-value is reduced the most. Gradient factors may be used to force deeper stops in a model which would otherwise tend to produce relatively shallow stops, by using a gradient factor with a small first number.

According to the thermodynamic model of Hugh LeMessurier and Brian Andrew Hills , this condition of optimum driving force for outgassing is satisfied when the ambient pressure is just sufficient to prevent phase separation bubble formation.


The fundamental difference of this approach is equating absolute ambient pressure with the total of the partial gas tensions in the tissue for each gas after decompression as the limiting point beyond which bubble formation is expected. The model assumes that the natural unsaturation in the tissues due to metabolic reduction in oxygen partial pressure provides the buffer against bubble formation, and that the tissue may be safely decompressed provided that the reduction in ambient pressure does not exceed this unsaturation value.

Clearly any method which increases the unsaturation would allow faster decompression, as the concentration gradient would be greater without risk of bubble formation. The natural unsaturation increases with depth, so a larger ambient pressure differential is possible at greater depth, and reduces as the diver surfaces. This model leads to slower ascent rates and deeper first stops, but shorter shallow stops, as there is less bubble phase gas to be eliminated.

The critical-volume criterion assumes that whenever the total volume of gas phase accumulated in the tissues exceeds a critical value, signs or symptoms of DCS will appear. This assumption is supported by doppler bubble detection surveys. The consequences of this approach depend strongly on the bubble formation and growth model used, primarily whether bubble formation is practicably avoidable during decompression. This approach is used in decompression models which assume that during practical decompression profiles, there will be growth of stable microscopic bubble nuclei which always exist in aqueous media, including living tissues.

Efficient decompression will minimize the total ascent time while limiting the total accumulation of bubbles to an acceptable non-symptomatic critical value. The physics and physiology of bubble growth and elimination indicate that it is more efficient to eliminate bubbles while they are very small. Models which include bubble phase have produced decompression profiles with slower ascents and deeper initial decompression stops as a way of curtailing bubble growth and facilitating early elimination, in comparison with the models which consider only dissolved phase gas.

This residual gas may be dissolved or in sub-clinical bubble form, and will continue to outgas while the diver remains at the surface. If a repetitive dive is made, the tissues are preloaded with this residual gas which will make them saturate faster. In repetitive diving, the slower tissues can accumulate gas day after day, if there is insufficient time for the gas to be eliminated between dives. This can be a problem for multi-day multi-dive situations. Multiple decompressions per day over multiple days can increase the risk of decompression sickness because of the build up of asymptomatic bubbles, which reduce the rate of off-gassing and are not accounted for in most decompression algorithms.

Deterministic decompression models are a rule based approach to calculating decompression. The models usually contain multiple depth and tissue dependent rules based on mathematical models of idealised tissue compartments. There is no objective mathematical way of evaluating the rules or overall risk other than comparison with empirical test results. The models are compared with experimental results and reports from the field, and rules are revised by qualitative judgment and curve fitting so that the revised model more closely predicts observed reality, and then further observations are made to assess the reliability of the model in extrapolations into previously untested ranges.

The usefulness of the model is judged on its accuracy and reliability in predicting the onset of symptomatic decompression sickness and asymptomatic venous bubbles during ascent. It may be reasonably assumed that in reality, both perfusion transport by blood circulation, and diffusion transport in tissues where there is little or no blood flow occur.

The problem with attempts to simultaneously model perfusion and diffusion is that there are large numbers of variables due to interactions between all of the tissue compartments and the problem becomes intractable. A way of simplifying the modelling of gas transfer into and out of tissues is to make assumptions about the limiting mechanism of dissolved gas transport to the tissues which control decompression. Assuming that either perfusion or diffusion has a dominant influence, and the other can be disregarded, can greatly reduce the number of variables.

The assumption that perfusion is the limiting mechanism leads to a model comprising a group of tissues with varied rates of perfusion, but supplied by blood of approximately equivalent gas concentration. It is also assumed that there is no gas transfer between tissue compartments by diffusion. This results in a parallel set of independent tissues, each with its own rate of ingassing and outgassing dependent on the rate of blood flowing through the tissue.

Gas uptake for each tissue is generally modelled as an exponential function, with a fixed compartment half-time, and gas elimination may also be modelled by an exponential function, with the same or a longer half time, or as a more complex function, as in the exponential-linear elimination model. The critical ratio hypothesis predicts that the development of bubbles will occur in a tissue when the ratio of dissolved gas partial pressure to ambient pressure exceeds a particular ratio for a given tissue.

The ratio may be the same for all tissue compartments or it may vary, and each compartment is allocated a specific critical supersaturation ratio, based on experimental observations. John Scott Haldane introduced the concept of half times to model the uptake and release of nitrogen into the blood. He suggested 5 tissue compartments with half times of 5, 10, 20, 40 and 75 minutes. To ensure this a number of decompression stops were incorporated into the ascent schedules. The ascent rate and the fastest tissue in the model determine the time and depth of the first stop.

Oh no, there's been an error 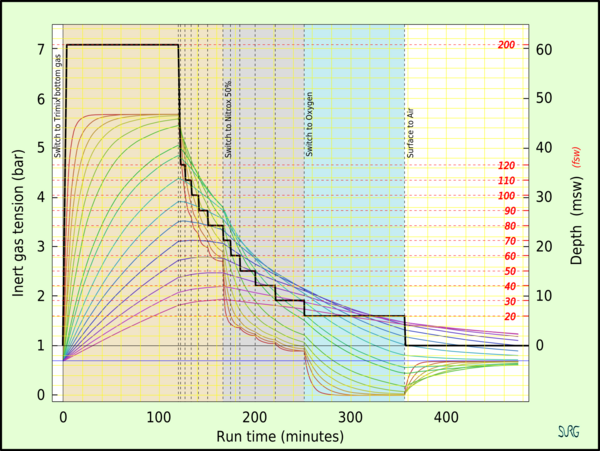 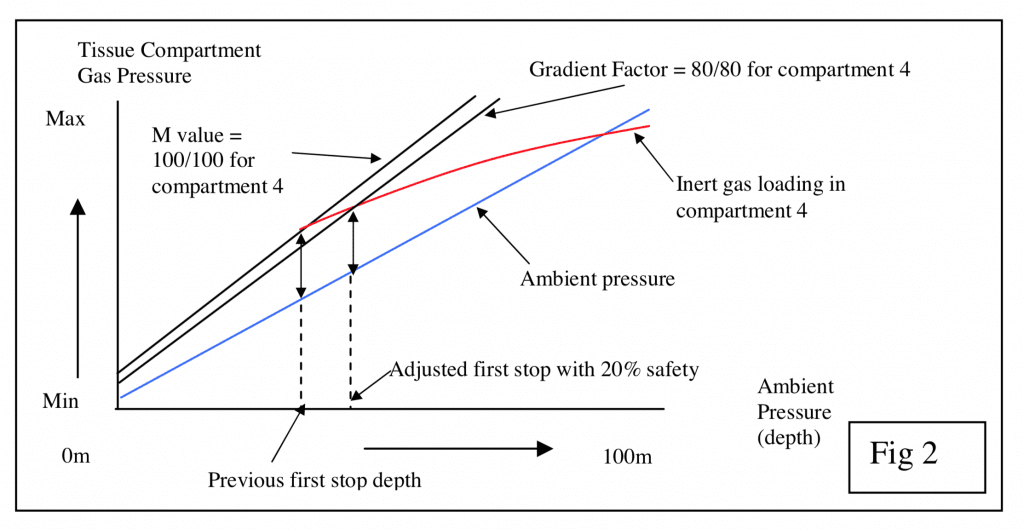 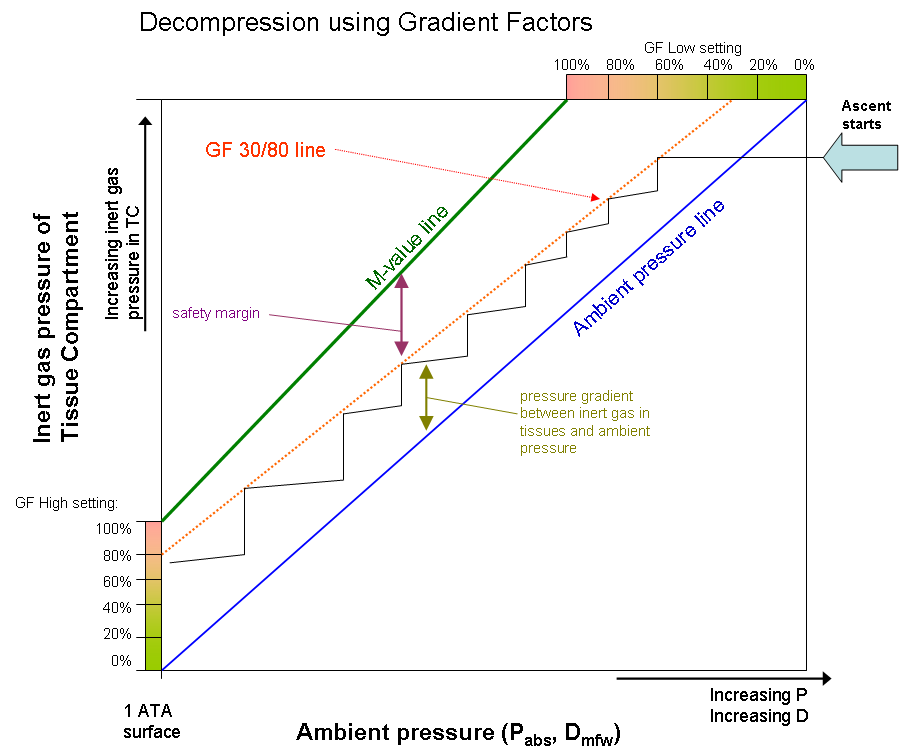 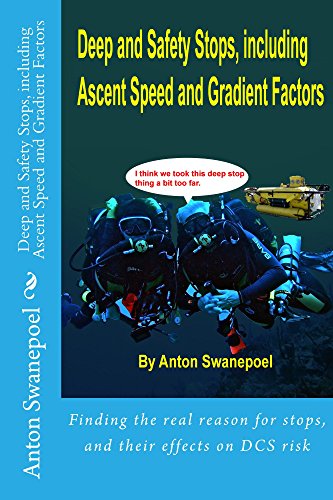 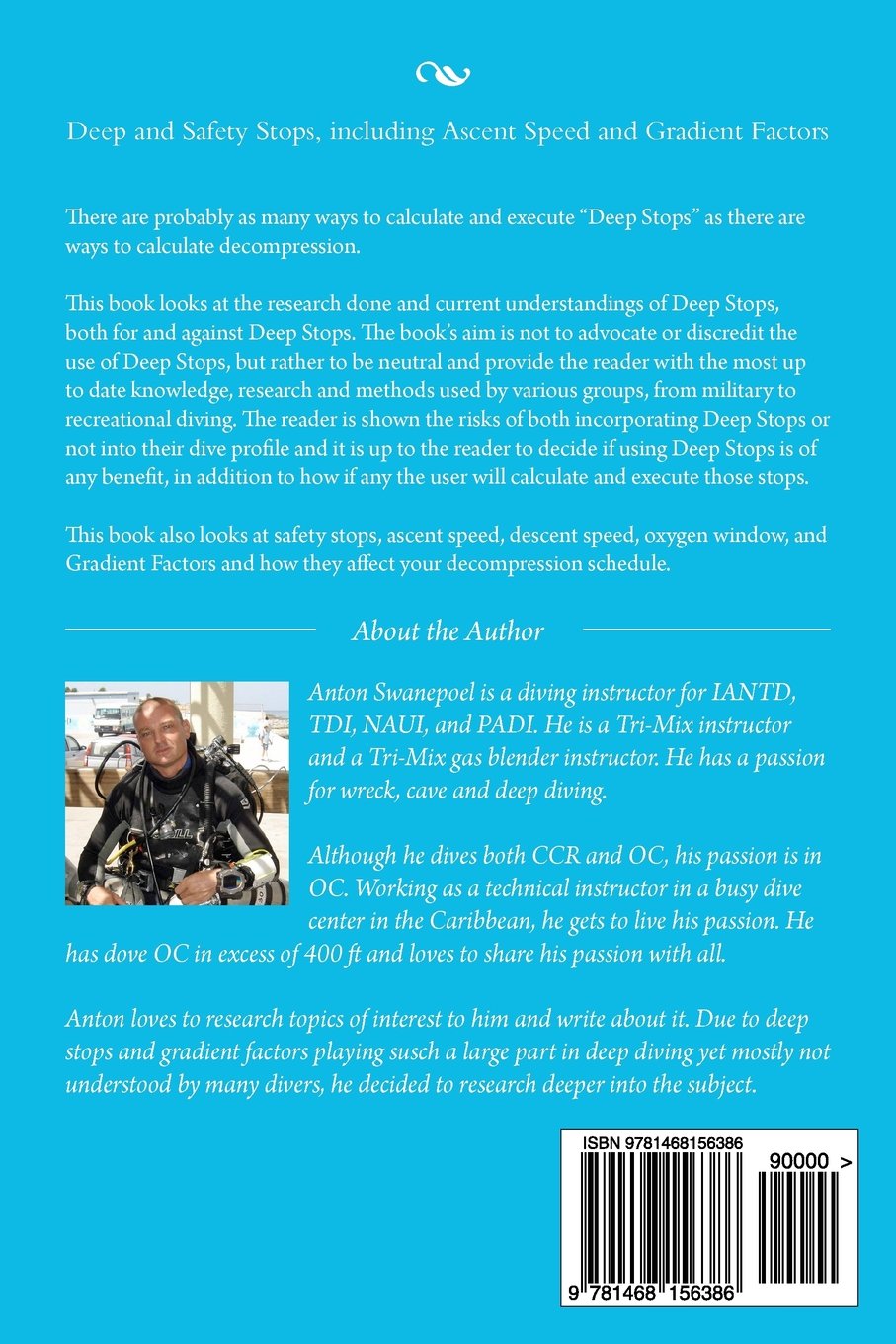